Salvador, the capital of Bahia, is one of the Northeast ́s cities with a lot of contrasts, a city of the old and new, a mingling of the past and the present. It is a city of old-world charm and a city bursting, building toward a bright industrial future. Both respect for past traditions and an eagerness for the future are to be found in the Bahian culture.

Founded by the Portuguese in 1549, Salvador served as the first Brazilian capital until 1763. The influence of the Portuguese culture is still to be seen in Salvador. Beautiful baroque churches and untouched colonial mansions containing the original blue and white Portuguese tiles remain standing as reminders of a wealthy past. 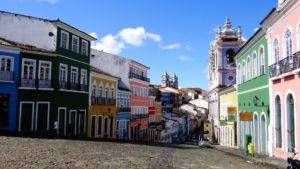 The Portuguese, however, introduced more than architecture, language, and customs. They also brought African slaves. Salvador became an important center for the infamous slave trade, and the rich African culture was added to the Portuguese and remnants of Indigenous cultures.

Candomblé and Capoeira are two major African contributions to Bahian culture. Capoeira, a dance developed from the traditional foot-fighting techniques introduced by the slaves of Angola, is practiced everywhere. The sounds of the drum, tambourine, and berimbau become stronger as dance/combats move faster and faster until they become a spinning, whirling picture. Capoeira is now a popular form of sport in Bahia.

Much of life in Salvador revolves around the Afro-Brazilian religions known as Candomblé. Candomblé incorporates elements of Catholicism and Indigenous animism, yet at the same time maintains deeply embedded African traditions and rituals. 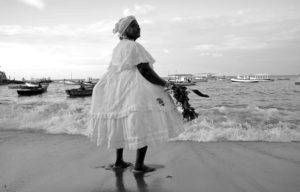 Salvador is a city full of music and rhythms. Festivals are plentiful throughout the year and reflect the love of the Baianos to sing, dance, and laugh. The December-January festivals of the Immaculate Conception and the festival of Our Lord of Bonfim are celebrated with flowers, feast, and pomp. In February, Carnival arrives, and for five days the city becomes engulfed in the frenzied revelry of the people. During June, the festivals of St. Anthony, St. John, and St. Peter, quiet and tranquil in comparison, celebrate the harvest.

Every day, however, Salvador has a festival flavor throughout the year. Baianos dressed in traditional costumes, add a distinctive color to the life of the city. Salvador is a unique city within Brazil and within the world. The blend of Portuguese, African and Indigenous cultures has produced one richly exotic culture.

Experience the city, enjoy the people, and you will come to understand why Baianos take pride in their culture, both past, and present.

To learn more about Salvador, click on the links below: